Welcome to the March edition of our Newsletter. In this month’s edition you can find:

On 18th February, NHS England published draft Violence Reduction Standards on the Future NHS Collaboration Platform.  A consultation period of 8 days had been given with a closing date on 2nd March.  Members were asked to answer 9 questions and provide their comments and observations.

The full comments and survey results are available here

NAHS will be calling on NHS England and NHS Improvement to ensure the wider Security Management aspect of the NHS agenda is not forgotten as Violence is just one of the many challenges we face operationally on a daily basis.

In the last few weeks, we have seen an increase in reports of crime that is believed to be directly related to the COVID-19 Pandemic.  The crime ranges from the alleged theft of scrubs, face masks, gloves and in particular hand gel / spirigel hand sanitiser.  We have even received anecdotal reports of wall-mounted dispensers being pulled off the wall and of the units and refills appearing for sale on eBay.

There have also been a number of media reports, many of which turned out to be false, of staff being assaulted and robbed for their NHS ID cards.

Whilst we cannot comment on the accuracy of these reports, it is considered prudent to warn all members nevertheless. 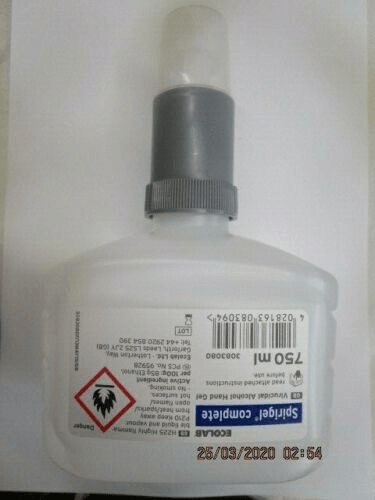 The Outstanding Security Performance Awards (OSPAs) took place on Wednesday, 26th February 2020 at the Royal Lancaster London. The OSPAs were presented in 15 categories and hosted by stand-up comedian and renowned Quiz Master Paul Sinha – also known as ‘The Sinnerman’ on ITV1’s The Chase.

The OSPAs recognise and reward companies and individuals across the security sector. The OSPAs are designed to be both independent and inclusive, providing an opportunity for outstanding performers, whether individuals or companies to be recognised and their success to be celebrated.

Following the #NAHS19 Awards, we submitted nominations for our awards winners and are extremely pleased and proud to report that the Clinical Liaison Nurses won the Outstanding Security Partnership award sponsored by Ward Security.

Clinical Liaison Nurses (CLNs) were established within Ashworth Hospital in Liverpool in the late 1990s to help re-establish the balance between the clinical and security agendas following the Fallon Inquiry. Mersey Care NHS Trust has been awarded an OSPA for the skills gap that CLNs fill. Their effectiveness in providing specialist advice on security issues as well as being clinically trained has been instrumental in the Trust’s progress. The role has helped the Trust to achieve 100% in its 2016 HM Prison and Probation Service audit. And following its success, despite cost-cutting measures, the Trust has been able to expand the role. This has enabled them to bring in a medium and low secure unit and to form a secure division, so the CLNs can expand their clinical portfolios.

As the team could not attend the event, their award was collected by NAHS Chair, Jayne King. 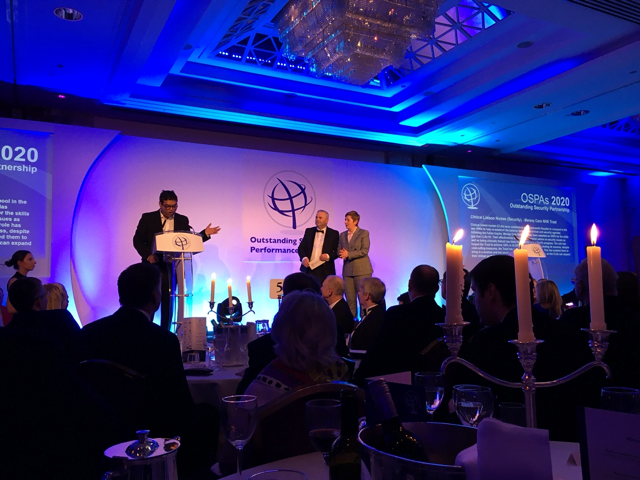 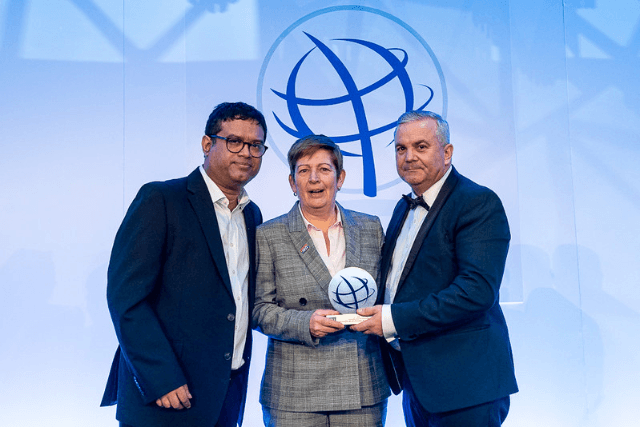 Invitation to Participate in Research Survey

NAHS was approached by Mark Dyer, a colleague from De Beers Group requesting our help with the completion of a survey he is doing and so we would like to invite all NAHS Members to participate.  Mark explains what it is all about below:

Should I stay or should I go? Is an independent research project designed by myself, with academic guidance, to study the levels of perceived risk frontline employees interpret and act upon in order to prevent criminal activity. The results will form the basis of my dissertation and will provide valuable insight into assisting senior managers in developing a global group policy. This is the third and final module on my Level 7 Advanced Diploma in Security Management course with Perpetuity ARC training.

All those that participate in the online survey via the Smart Survey do so anonymously and at no point will I be able to identify any participant. Once the survey is completed all data relating to each participant is deleted, and therefore I can only retrieve the statistical data relating to their responses to the closed question survey.

Take Part in the Survey Here

I very much look forward to your involvement and support in assisting me to gather the data needed to test my research question. The survey is available to be accessed from the 16/03/2020 and is initially open for a period of 4-6 weeks with a maximum of 1000 participants allotted to take part. This shall be closely monitored and a decision to extend the survey shall be made dependant on the level of responses.

Since the arrival of COVID-19, many NHS Trusts and Security providers have experienced challenges in maintaining their enhanced staffing levels.  With Trusts stopping all visiting and going into a virtual Lockdown, many are reporting an increasing requirement for ad hoc Security.

NAHS has been overwhelmed by the community spirit and supportive nature of the sector and has been contacted directly by companies, large and small offering additional staff to the NHS.  To make things easy, we have adapted the new Job Page to list the contact details of companies with available staff to augment your core teams.  The Job page can be found on the website here

Members are able to post jobs which can be viewed by all website visitors and as our website is seeing 400 to 500 new visitors each month posting your jobs here increases the scope and range of your audience nationally.  Our Corporate Partners will be able to provide jobs which we will post on their behalf.  The jobs page welcomes adverts for all Security related positions such as Security Officers (in house as well as external / contract), Car Park Management and operational officers, Security Management and ASMS roles.

If you wish to advertise or want to discuss any opportunities, please contact John Currie at info@nahs.org.uk.

NAHS has been given access to the Metropolitan PSO Shield, a downloadable app that gives Security Managers within the London area regular updates, information and intelligence.  We are expecting to be able to share a new National CT links and downloadable app in the very near future. 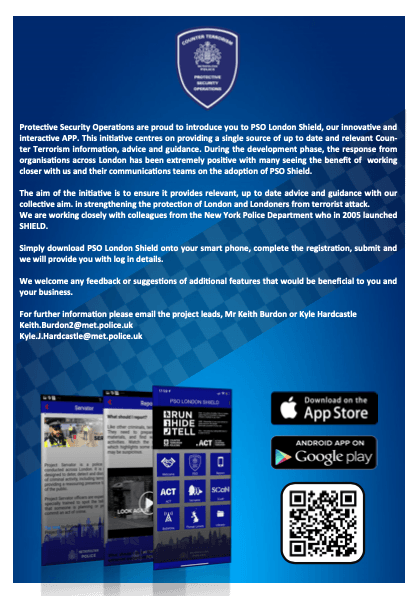 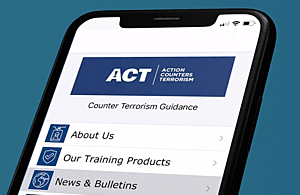 On 5th March 2020, the National Counter Terrorism Security Office (NaCTSO) launched the new Action Counters Terrorism (ACT) app.  You can download the Urim app in Google Play or App Store. Once downloaded, please email ct@highfieldelearning.com to request a user name and password.  The new App will give you:

We plan to return to The Studio, Birmingham on Thursday 12th November 2020 for this year’s AGM, Conference and Awards #NAHS20.  Please Save the date in your calendar now and look out for the link to the ticket booking page coming soon.

We will be keeping an eye on the impact COVID-19 has on the NHS and the Security sector, however, as IFSEC and The Security Event have both been moved to September we are quietly confident that #NAHS20 will go ahead as planned.

Due to the COVID-19 pandemic, we are unable to launch the NAHS CPD for 2020, which is being created and provided by the Security Institute.

Once finalised, we will be providing specific guidance and resources and hope to run mini-workshops at the regional meetings with hints and tips on how to complete your CPD.

The new criteria and 2020 CPD template will be issued by the Security Institute in the very near future and details and links sent to members and placed on the website.

If members experience any difficulties or need any assistance or guidance completing their CPD submission, please email info@nahs.org.uk

As the country is in ‘Lockdown’ with all social gatherings, events and Conferences cancelled due to the Coronavirus (COVID-19) Pandemic, IFSEC and The Security Event have both postponed their events and have rearranged them for September.  NAHS will speaking at the event and will be participating in a panel discussion at The Security Event.

The Healthcare FM Conference has been postponed to 7th September.  The Future Healthcare event has also been cancelled and so their next event will take place in 2021.  as this situation is extremely fluid and subject to change, we would advise members ton keep an eye on the Events page.  The organisers hope things to have settled down by September and so we recommend members save the dates.

In our next Edition

As usual, we are keen to promote your good news stories, achievements and case studies as it is great to share good practice
Please direct any questions and send any news items to info@nahs.org.uk

Not recently active
This site uses cookies: Find out more.